On 17th August 1842, 5-6,000 desperate men & women rioted at St Peg Mills on St Peg Lane in Cleckheaton. They were trying to shut mills down by pulling out boiler plugs to protest against bad working conditions, high food prices and lack of political representation. They were demanding political reform and the vote (The Chartist movement; see plaque 5). They managed to draw 2 of 3 boiler plugs before hundreds of special constables, a troop of lancers and a detachment of the Yorkshire Hussars challenged them. Fighting broke out on a grand scale. 30 people were arrested, 4 of them local men (Thomas Barber, John Hey, Charles Leighton, & Richard Thomson). The throng was dispersed without loss of life. 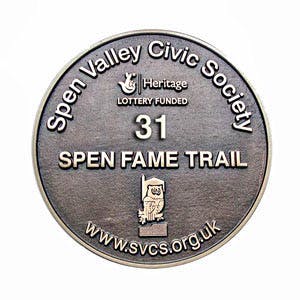