Spen Valley boasts the first public illuminations! Heckmondwike put on its first display in 1868 when gas-fired lights celebrated the opening of the Market. Plumes, crowns and feathers decorated the town. 1885 saw the first Christmas Illuminations which continued to improve, and progressed to electric power. By 1930, set pieces based on pantomime and nursery rhyme characters were added: a mini-version of Blackpool's Illuminations. In 1953 on Christmas Eve a bloke fell out of a pub and was later chased by policemen when seen making off with two of Snow White's dwarves. The lights  deteriorated after the 1970's, but in their centenary year of 1985, a huge voluntary effort was made to rekindle their former glory. 9,000 people came to witness the switch on. Heckmondwike's Green Park now has a permanent lighting system called the Crown of Lights. Plaque 20 is in Green Park. 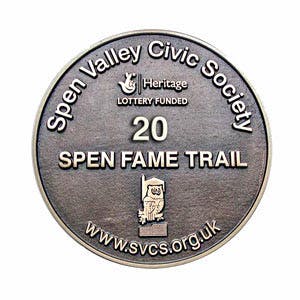