Headlands Hall, Listed Grade II, was built in 1690 and has seen much Spen Valley history including Luddite uprisings in 1812. At that time it was a coaching inn called The Old Yew Tree on the main route from Leeds to Manchester via Roberttown and Huddersfield. After the abortive Luddite attack on Cartwrights Mill at Rawfolds, the military brought their only captives, injured Luddites John Booth and Samuel Hartley, to the Old Yew Tree Inn. When a large crowd sympathetic to the Luddite cause began to gather, the nervous authorities removed the two men to the Star Inn, further towards Huddersfield in Roberttown village. See plaque 7 (John Booth and the Star Inn) and plaque 29 (William Cartwright). Opposite Headlands Hall is a former Toll House. 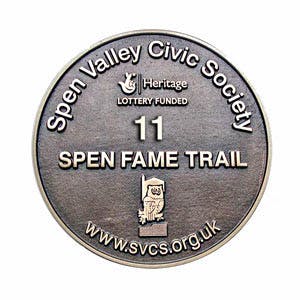