A famous Spen Valley character in the 18th century was George Humble, landlord of the Globe Inn at Millbridge. The Inn stood almost opposite Millbridge Working Mens' Club on the A62 Huddersfield Road, but was demolished in the 1960's. As well as managing the busy coaching inn (which was also a Post house where the Royal Mail coaches stopped to collect local people's mail), he was an avid horse-racing fan. He organised highly popular local horse races. The first in the 1780's was the Peep Green Races at Hartshead. The second, after 1800, was a mid-summer race meeting called the Roberttown Races. The course ran from the Star Inn Roberttown (see also Plaque 7) to the Gray Ox pub at Hartshead. The races were stopped when a jockey died after colliding with a haulier's wagon whilst crossing Far Common Road, then the main road. 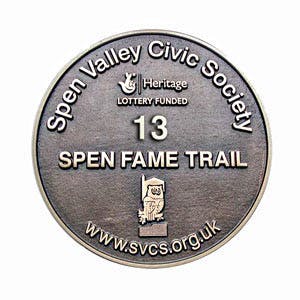