In the 1700's and early 1800's, most families in Heckmondwike were hand loom weavers, working at home. They made white woollen blankets, which they sold in a room called the Blanket Hall  built in 1811at the back of the George & Dragon Inn. The Inn stood next to Heckmondwike's market place (now Green Park) and its landlord was Francis Popplewell. The second larger Blanket Hall was built across Westgate by Blanket Hall Street in 1839, but by 1869 it had to be sold because the trade had been taken over by machines in factories. See Joseph Pinder, plaque 25, the last hand-loom weaver in Spen Valley.

The Blanket Halls and the Inn (later called The George, pictured here) are all now gone, replaced by pavements! 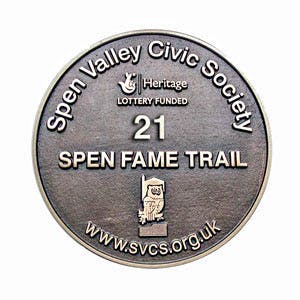