Edward Wadsworth (1889-1949) was one of the UK's most respected 20th century artists. His works adorn galleries and collections across the globe. The nearest can be seen in Leeds City Art Gallery. Born in Cleckheaton in the Spen Valley, he studied at London's Slade School of Art, became a fine tempura artist and was a pioneer of the Vorticist movement - depicting nature in straight and angular patterns. He used his understanding of light and colour to design camouflage for warships in World War One and helped decorate the Queen Mary liner. His painting The Cattewater, Plymouth Sound made £165,000 at Sotheby's in 1992. Edward lived at Highfield House, off Waltroyd Road Cleckheaton (pictured above).

See also plaque 33 about his grandfather Elymas Wadsworth and plaque 41 about his father J Walter Wadsworth. 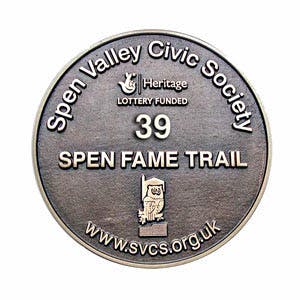