The Rydings, pictured below, was once an elegant hall surrounded by parkland. In the 1830's it was the Nussey family's home. Daughter Ellen Nussey met Charlotte Bronte at school and became a lifelong friend. Charlotte's visits to the house inspired her to use it in her first novel Jane Eyre, where it appears as Thornfield Hall, home to Mr Rochester. Its castellated roofline was where mad Mrs Rochester met her demise after setting fire to the building. Unlike its fictional equivalent, Rydings Hall survives, but is surrounded by a paint factory. You can see it through the factory gate from the A62 Leeds-Huddersfield road at Birstall, near its junction with the A652 Bradford-Dewsbury road. Despite its current setting, the building is Grade II Listed.

The photo above shows the gateway into the parkland on Muffit Lane, an old road which is the shortest route from Gomersal. If Charlotte Bronte had been walking from her friend Mary Taylor's to Ellen's house, this is the way she would have taken. You can still see the trees marking the driveway through the park down in the direction of Rydings Hall. 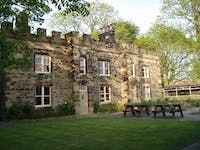 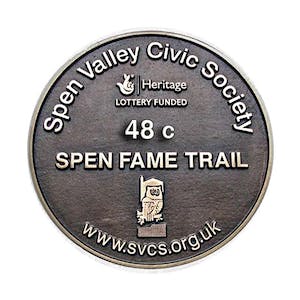