Charlotte Bronte arrived at Roe Head School aged 14 and completed her education there, making two lifelong friends in fellow-pupils Mary Taylor from the Red House Gomersal and Ellen Nussey from Rydings Hall Birstall. Charlotte made many visits to their family homes, which later featured in her novels. Charlotte returned as a teacher from 1835-1838, but her ambition (never fulfilled) was to run her own school at the Parsonage in Haworth. Roe Head (pictured above) is now Hollybank School, part of the Hollybank Trust for students with special needs, and the plaque there was erected by Mirfield Civic Society.

Ellen Nussey's childhood home (Rydings Hall, see Plaque 48c) was surrounded by parkland. It now stands in the middle of a paint factory, and can be seen from the A62 close to its junction with the A652 at Birstall  Smithies. Listed Grade II, its striking castellated roofline was the scene of mad Mrs Rochester's demise after she set fire to Thornfield Hall, Charlotte's name for the house in Jane Eyre, her first, highly-successful novel published in 1847. 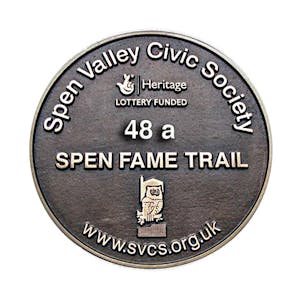